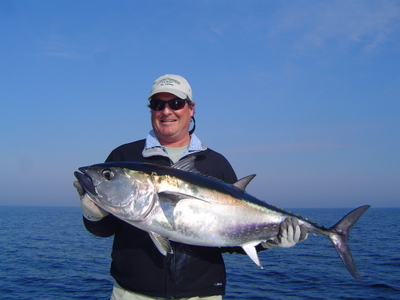 Cape Cod Bay was the place to be last week before the big blow out of the northeast. Here's a shot of one of the fish. Most of these small bluefin were between fourty and fifty pounds. Now THAT"S fun.

October 1st was the most recent day that I fished the Kennebec watershed for stripers. There were still plenty of fish to be caught, once we found where they we grouped up. Young of the year alewives moving down river kept the bass active when the water was moving quickly. Some of the large bays just inside the mouth of the river held good groups of fish over the last weekend of September. Fishing on the ledges east and west of Popham was disappointing on that Saturday, but earlier that week it was worth he trip out front both in terms of numbers and sizes of the fish that we caught.

I had an angler catch a tagged fish during the last week of September. Usually I see a couple over the course of a season of guiding but this was the first one of 2006. I'll post all of the data when I get the tag return. You can just make out the yellow tag covered in green growth in the photo above.