The last three days have been a lot of fun. Either the fish that have been hiding out in or off the river are becoming more active or we've had a push of new bass move into our waters. I suspect that it the latter, but until I get my acoustical tags I'll have to keep on guessing. 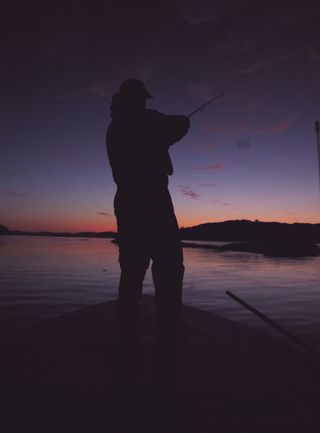 We were lines in by 4:15 Monday morning. Despite our early start we didn't find any stripers until the water just started to rise at 5:00. We were perfectly positioned to have single and double waking fish pass by us as they cruised in a foot of water, up a bar and turned the corner to move onto the flat. We only took one fish just over the slot in that spot but had lots of fun for about 45 minutes. With no wind the water was glassy calm and we could see these bulges of water pushing towards us from a hundred yards away.

We prospected on a couple of other flats with no sign of fish and then moved out to cast into the surf that was rolling up on the island off the mouth of the river. Nothing but mackerel out there that we could find. About half tide we were back on fish in shallow water with just enough sunlight and water clarity to see them fairly close to the boat and get an idea of what they were up to. The water was too deep to expect wakes and we saw no swirls or splashes but could watch the stripers grubbing on the bottom in an area rich with crabs and shrimp. We couldn't spot fish way off and plot our cast, but we could get an idea of where the fish were milling and cruising and make some quick, short casts. The crab flies were the ticket. Didn't try any shrimp imitations so can't report on their effectiveness.

We finished our 12 hour marathon by working the deeper ledges on the bottom of the tide as we headed back upriver, finding fish willing to eat at every stop. The water is still amazingly muddy in the Kennebec at this stage of the tide but the bass could find what we were tossing. This wasn't fly water so we went to the  1 oz. Lunker City Pro Jig with 5 3/4 inch Fin-S-Fish. This is my stand by jig choice, versatile and effective - sinks readily, great action, quality hook, catches fish. 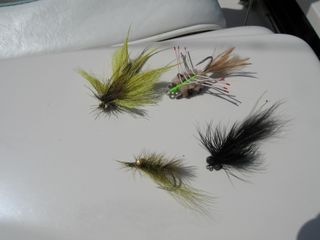 Tuesday was in many ways similar to Monday, without the light later in the morning. We didn't see as many waking fish. Maybe it was the tide being an hour later, maybe it was the guy who kept trolling back and forth close off our bow right in the travel lane for the fish, maybe it was just a different day. We had a number of shots but just couldn't put it together. Fishing with Roger and John is always a blast. These guys can cast, tie gorgeous and effective flies and know how to catch fish. 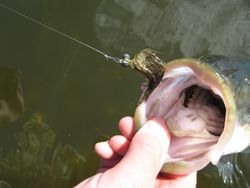 We messed around chasing a big lone fish on another mud flat before moving to find the crab patrol bass. They were cooperative and it was fun to see them act just as I expected. I told Roger and John to "think nymphing", that the takes would be subtle and come when the fly was right on the bottom and the bass would spit more than they could imagine. After a few minutes Roger kept exclaiming "it's just like nymphing, it's just like nymphing...that hit was nothing like a classic striper take." Roger was dialed in and took a number of fish. We haven't had many stripers in Maine that are under 20 inches and we all rejoiced at finding some schoolies. The best fish of the day spit the hook on Roger after five minutes through no fault of his. Played perfectly it was one of those fishing moments where you toss up your hands and have no thoughts of what you could have done differently.

When we lost the water movement we made a big move. Roger and John made a quick trip back to the Gun Club to check in and announce that there were more fish still to be caught. I hauled out at Morse Cove, relaunched in the New Meadows and picked up John and Roger to fish the top of the dropping tide under perfect cloudy skies. It took us some exploring to find the flat that the fish were favoring but there was no mistaking where they were when one of Roger's casts caused thirty fish to swirl and bolt. They didn't go far and four casts later the Gurgler was harassed and finally inhaled by a nice fish. We caught a few more and then...they were gone. We then found actively feeding fish under diving birds for the first time in weeks. The stripers were spread out and coming up as singles, but once again the Gurgler was the perfect call on Roger's part. Can you guess what I was tying last night after another 12 hour day (I had to do some prospecting on my own after Roger and John headed home to stay married) while sipping a Bud, listening to the Sox and trying to stay awake until 9:00?