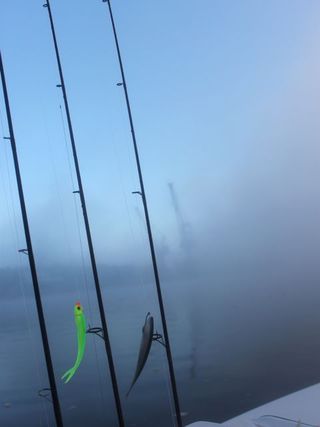 Striper fishing keeps you wondering and makes you think. After a stellar Thursday afternoon/ evening on the Kennebec River, Friday morning was disappointing for us. The fish that we found, which wasn't many, just had to be coaxed to eat. No reckless abandon. No surface feeds. No repeat of the show from the day before. The scenery was stunning, with early morning fog giving way to a spectacularly blue sky and an absolutely calm water surface. A great day for a boat ride.

We managed to track down a few stripers in various types of water during the course of the morning. Chuck's spent a lot of time on a lot of waters but it had been a while since he'd been cruising around the Kennebec. Tony shot 486 photos. Chuck had to answer his phone 37 times. Tony was lamenting his commitment to running T-ball practice in the early afternoon. We laughed, ran around, poled some flats, explored some salt marshes and had a lot of fun, even if I was cursing the crisp, dry, great to be alive day.

Back in gear this afternoon, the falling tide was kind to us. Made the first drift at 3:00 PM. Not as many fish showing on the surface compared to Thursday afternoon, but plenty of stripers just horned up about all the herring in the river. It seemed like any structure with strong flowing water held fish. I was surprised by the limited boat traffic. I noticed two boats alter course as they ran up river, drawn to a cove with gulls circling overhead. Each boat slowed to an idle, as the occupants scanned the surface of the water. For those few moments, no herring tried to flee the water in panic, no swirls gave away the stripers holding in the strong rips. Off the angler's went, maybe in search of "more productive water", maybe late for a cookout. Drifting down current, we were taking a break, wiping fish slime off our hands, re-rigging leaders and getting ready to make another pass. Gulls circling high means bait holding deep. There were also about a dozen birds sitting on the tide exposed ledge, just waiting for the next flurry. The action in this particular cove continued for an hour and we left feeding fish to check other locations. Those birds were dead giveaways. They were expending the energy to fly overhead for a reason.

Second to last stop of the evening had less current than the other places we'd fished. That, coupled with the shallower water and more surfacing fish, made for perfect popper conditions. It was time to get out a rod with a floating line and have some fun. Enough of that deep water work. 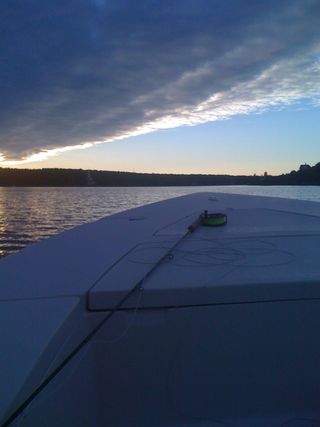 In a perfect finish to the outing, there were striped bass prowling a flat in one to three feet of ultra calm water just as the tide was starting to rise and the sun was about to set. An olive hackled hollow flye seemed appropriate...and worked just fine. Really nice way to end the day. Catching stripers any way, any where is great. Shallow water sightcasting with a fly rod for cooperative fish just rocks.

Should be a good day tomorrow. Weather forecast is favorable, although thunderstorms may chase us off the water in the afternoon. If you want to get out in some stunning settings and chase these marvelous gamefish, send us an email or give us a call.