I fished with Fritz in his gorgeous new 20 foot Maritime Skiff this weekend. Part of our mission is to teach him to be able to run the boat, competently, confidently and comfortably. Part of our mission, is of course, to catch fish. We are succeeding at both.

Saturday evening we spent the bulk of our time sorting through new gear, figuring out how to best stow everything, fueling procedures and putting some hours on the engine and the new owner. It was slack tide when we got underway, so we ran to the mouth of the Kennebec, scouted a couple of coves, made a few casts and then headed back up river for dinner at The Cabin.

On the east shore of Stage Island we found 200 gulls (mixed species), innumerable cormorants, terns, eagles, osprey, egrets and eiders. It was clear that there was something going on there. Our casts produced no results but our sonar screen was lit up with balls of bait.

Sunday morning we didn't dare start out in the dark. The Kennebec is still loaded with debris from the flooding. We were rewarded at our first stop with breaking fish. Schoolie stripers. This wasn't water boiling, birds screaming, bait fleeing, frenzied action but consistent, single breaking fish spread along a couple hundred yards. The tide was just starting to move and the stripers tended to hang on the drop off where it went from 6 to 15 feet deep.

We found the same pattern in a couple other coves for the first few hours of the morning. Half of our stops produced no results. We checked one flat that we both love to fish. No signs, no strikes.

All of the fish that we caught we little, little guys. We spent some time fishing deep in the areas where we were finding the fish, looking for a heftier return, but no luck. 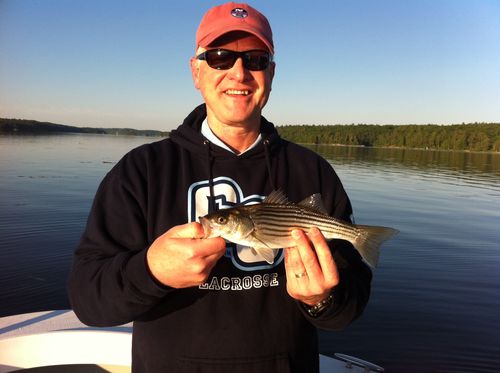 The water is clearer but still a mess. By half tide the draining river was again filled with swirling silt. There was far more bait visible that the previous week, but still not as much as prior to the flooding. I'm heading back over to eastern Casco Bay early this week but optimistic about the Kennebec for the coming weekend.