The one constant in fall fishing is change. There certainly are patterns, year to year, day to day, but your fishing plans always need to be flexible this time of year. In June, a group of stripers may work the tidal currents in a section of the river a mile long for a week straight. In July, stable weather has pods of bass on the flats acting according to script day after day. In September and October, things are always in flux.

I fished with Fritz Saturday and Sunday of this holiday weekend. Saturday morning we went looking for a pattern that repeats itself every fall, stripers setting up in moving water over great structure, looking to ambush young-of-the-year alewives. Our first stop produced a couple fish, but far less action than we'd hoped. Sticking with our plan (not always the right call), we found what we were looking for at stop number two. It was a hoot. Therapy for Fritz after a long week in the office. A perfect way to slide mentally into the holiday weekend that sadly marks the end of summer. The fish were happy. The Lonely Angler Zipster was money. We didn't see an other boat all morning. 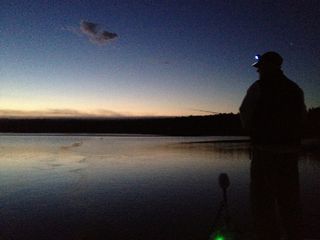 Sunday morning we were underway before 4:30 AM and set up on a draining flat before 5:00, well before sunset and two hours before low tide. Perfect, right. This was a spot that has been so consistant, even in late July and early August, when the fishing was at its ebb. Nada. Well, not quite, but we only saw two pushes of water on the glassy surface, heard no slurps or slaps, and had one little schoolies striped bass swat at the surface plug. 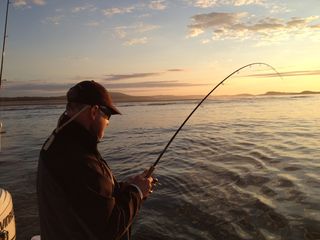 We made a big move and ran out to fish the beach from Popham to Small Point. What a place to be at sunrise. There we fish out there, chasing small bait that I never got a chance to identify. The only signs we saw were a couple of these snacks skipping across the surface of the water in a race for their lives. No swirls or splashes. No big feeds. Once we lost the tide, the signs stopped and we moved on. 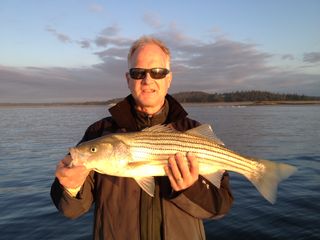 Arriving on an oceanside flat just as the water was rising, we found large schools of stripers cruising in the shallow water over the sand bottom. After watching them for a while, tossing at them with no results we moved on. We saw no signs of any feeding activity and no reaction to our offerings.

The water temperature has dropped significantly over the past ten days. Out along the beach it was 54.5 degrees. That's a significant change. The large schools of bluefish that had been so predictable the last two weeks have moved on. There are still chopper blues and gator blues around, but they are much more dispersed. The mackerel are back along shore. The mouth of the Kennebec was loaded with them both mornings. There was also huge schools of macs on a line between Jacknife Ledge and Fuller Rock in about 60 feet of water. Keep your eyes open and you may run onto a pod of stripers or a swarm of blues going nuts on these mackerel. If your timing is right it will be a day you remember all winter.