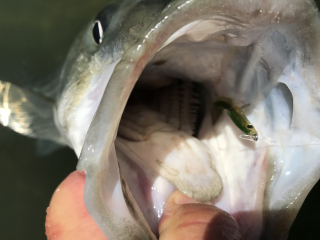 I’ve been trying to figure out how to describe the change in the fishing in the Kennebec River and keep coming up with conflicting thoughts. This week has been incredible and disappointing. I’ve noticed a distinct difference from last week, when there were lots of active feeds all over the River and we were all raving about the great fishing. Where I’ve been, that has changed and not for the better but on the flats, wow...and come on fish. We’re seeing a lot of bass from 18 inch micro stripers to 40 inch cow bass in water from 6 feet to 12 inches deep. A lot. Sometimes they are hungry and aggressive and cooperative. Sometimes they are incredibly fussy. Early mornings on the coming tide have been generally slow for bigger fish. They just haven’t been waking much and thus sightcasting to them is really tough. You get a swirl, and a short push of water, and often a refusal, then nada for a while. Late morning to early afternoon, under bright sun, the larger bass have been much more cooperative and accommodating. Funny, this fishing.

The morning tide has been weak and I am sure that makes a difference, not in our favor. If you’re planning a striper trip far in advance, you’d be well served to target dates when the tides are at or above normal. In the Kennebec, an 8 foot high tide (or less, as measured at Fort Popham) can be challenging. 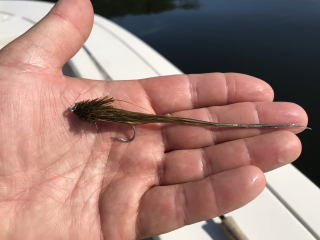 My general approach is to start the morning with a spun deer hair slider in a dark color if we’re fishing on a darker bottom flat up in the marshes. The fish are usually “up” in the water column, at least when we can target individual bass or pods. These flies push some water and often illicit vengeful strikes. Once we shift to more traditional “sightcasting” over light colored bottom flats, the trick is to figure out if the fish are looking up or down. If down, it is time for shrimp, crab, or something that combines attributes of both. If they are looking up, we switch to baitfish patterns, sometimes small sand eel imitations and other times larger hollow flyes. You can get some important clues from the way the stripers break the surface when they feed, but we also rely on what worked yesterday on that flat and then changing fly pattern after two refusals on really good shots.

Part of what makes fishing funny is the mix of predictable fish behavior and the ever-changing reaction, location, travel, feeding patterns, of these game fish. Use what you learned last time out, but don’t get stuck in a rut. Be ready to add a lot of tippet as you try fly after fly. While I believe presentation trumps all, getting to watch the reaction of bass after bass after bass leaves me with zero doubt that on some days finding the right fly is key. 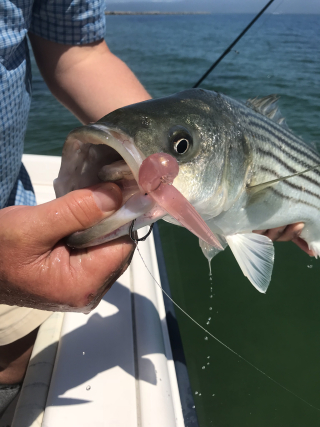 As for hardware chucking (which by the way, I’m proud to admit to doing) the standouts in shallow water continue to be the Albie Snax from Fish Snax Lures, the Zipster spook from Lonely Angler, and the small RonZ’s. I’m sure that the Hogy Skinny’s would be well received along with other small plastics. Don’t ignore creature baits if you are fishing the green water rolling off ledges. That largemouth bait also takes big, big stripers in shallow water close to the ocean at times. I haven’t recently tied on any of the small buck tails that I tie up, but maybe we’ll test them tomorrow.

Tides here in midcoast Maine are improving. Fish whenever you can. Even if it doesn’t turn out to be the day that you will recall for years to come, you will learn more. Wear long pants, as the greenheads are just stating to show up. They aren’t out in force yet, but it will only be a matter of days.

I’m booked rest of this week and headed back to the Vineyard for another long weekend of trips there but may have the 21st and 22nd open if you want to get out to chase striped bass here in Maine.

After three incredible weeks fishing Martha’s Vineyard, Nantucket, and surrounding waters it was wonderful to run down the Kennebec River yesterday morning just after 4:00 am with Fritz Folts, cruising past water loaded with flipping herring and then to be greeted by breaking fish and diving gulls at our first stop. There were individual bass chasing herring up onto a small mud flat and pods of stripers coming up in the middle of the channel and a few fish popping right tight to shore and plenty more revealing themselves on the sounder screen. You know when there are six herons in a span of shore 40 yards long fighting over the best fishing spot with herring gulls, black backs, turns and bald eagles diving from overhead there’s some bait in the area. The mission was to catch fish on the surface with the spook and we found success...but, we weren’t finding fish bigger than about 25 inches. After a short discussion, we made the decision to leave fish.

We could have taken the “quantity” approach, catching as many fish as possible and hoping that a few would end up being larger bass. We did spend a little time fishing adjacent structure instead of the small pods of busting bass, but that strategy wasn’t producing what we wanted. With zero wind and the sun still low in the sky and a southwest flow forecast for the day, conditions were ideal for fishing some shallow water, targeting waking fish. If you’re swallowing noseeums with bites of your Frosty’s donuts (they open at 4:00 am!), then you should be focused on shallow water fish.

We ran to a flat that often holds large stripers. As we were slowly working our way up into the middle of the cove, we could see fish pushing water ahead of us in a couple of different locations. We were about two and half hours into the dropping tide in two feet or so of water and the clock was against us. First pod to approach gave Fritz a perfect head on shot and he made the cast. The fish in the group immediately showed interest in the spook and as one tried to eat it I got a good look at how large it was. With great presence of mind, Fritz calmly twitched and paused the lure, like he was toying with the twenty sixth 18 inch schoolie of the morning. He played it perfectly, keepin these fish interested and competitive, but also giving them a chance to line themselves up for the eat. It’s not always easy for a larger fish in shallow water to grab a surface plug on the first try. Not far off the bow we both watched a big, white mouth open and inhale the zipster after another fish of similar size missed it. The hook stuck and the striper took off. After a well executed fight, Fritz lifted his rod to bring the leader to my hand. I realized that this fish would be a two-hander. Elated, we quickly snapped a few photos and Fritz returned the feisty bass to the water. 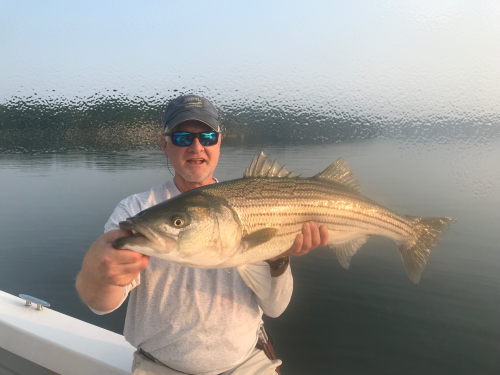 Some people swear by the adage of not leaving fish to find fish. We however, left for good reasons, and it payed off. Part of our decision making was based upon how we most wanted to fish, what would bring the greatest reward if we were successful, and the pretty ideal conditions for doing so.

I hope you get a chance to enjoy this incredible fishery. If you want to get out on the water, send me an email (pfallon@mainestripers.com) or give me a call at 207-522-9900. I do have a couple of openings coming up before my next trip south.