Here’s a recap of week 2 chasing albies around Cape Cod and the Islands:

The albie -lesson that stands out this week is that today isn’t yesterday and tomorrow won’t be today. I’ve been on the water every day this week, often for 10 to 12 hour trips, and no two days have been the same. The weather has varied, the places where we found fish varied, and the behavior of those fish varied. The rate of change with all things tied to these fish seems to correlate with their frenetic nature and tremendous energy. 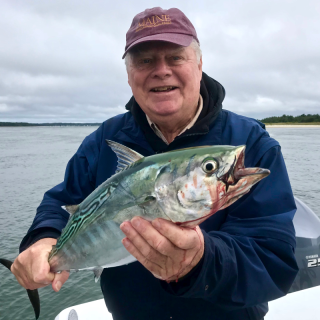 The best classic albie fishing we encountered was on Friday. We cruised Waquoit to Cotuit at a good clip, only pausing briefly to look and glass the water. When we saw the size of the fleet at Craigville Beach, we kept going and promptly found packs of roving albies off of Hyannis moving courteously into the tide and staying up for for a pleasing length of time. It’s so much fun to set up and wait for the fish to come to you, to see them slash and swirl, and then to try to make “the” cast. This behavior continued throughout the tide and we landed a lot of fish on the 7/8 oz. Hogy SI Epoxy Jig in pink and the Albie Snax in white, pink, and amber. We were never forced to toss anything else at them. Early afternoon was tough for us. The pods weren’t showing as frequently and would quickly splash and sound. Later in the afternoon our perseverance was rewarded with fast moving fish between Great Pond and Waquoit. These guys weren’t so easy, but they were catchable. 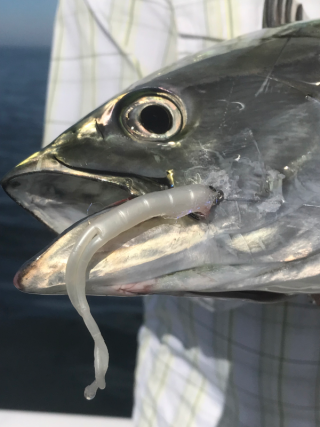 On Saturday we covered a lot of ground and heard reports of a lot of tough fishing. Finally around 10:00 we found good numbers of albies breaking the surface with a slow and subtle rise in the greasy calm water, totally unlike any feeding behavior we've seen so far this season (probably because wind has been our constant companion).We were right on the edge of a sharp drop off that held a lot of bait.This too was incredibly satisfying as the challenge involved boat maneuvering, accurate casts, and the right retrieve. After some experimenting, we struck gold with the hot pink Albie Snax fished with a twitch and pause retrieve, similar to what you’d use on a flat for stripers. They ate it well and we were all smiles, fortunate to have these fish to ourselves for the two hours that they were up  - almost unheard of on a Saturday in September. The most unusual catch of the day came when we paused over structure to jig up a couple of scup and sea bass as a mental break from the albie focus. I dropped my 1 1/8 oz. epoxy jig to the bottom to in a quick jigging demonstration and was tight to an albie as soon as I lifted the jig off the bottom. It’s not the first time we’ve jigged these fish, but it was the most surprising.

Sunday was slow but we had our chances. We took a chance on Nobska lighting up at first light. The wind had been blowing bait in that direction, there would be good water movement just after sunrise, and the fish had not been there in any significant numbers yet. We cruised and cast for an hour with nothing to show for our play. It sounds like we had the right idea but were off in our timing by a tide cycle. Almost every boat coming out of the Inner Harbor, Great Pond, and Green Pond blasted right up to the fleet of 30+ boats clusters off the Waquoit jetty, right past the small groups of fish working the outflows of the Falmouth Ponds and occasionally pinning bait right into the sand shoreline. We finished the morning on fast moving small groups in the shallows between Allen Harbor and Harwichport, but success only came blind casting in areas where we had found the fish the day prior. 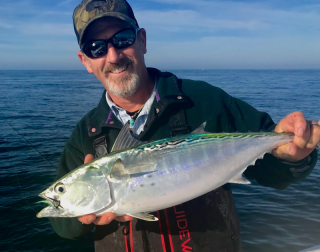 Monday was great in deeper water for fly caught albies, really a standout day. The fish weren't staying up for as long as we would have liked but they were there in huge numbers eating sand eels and were perfect fly rod targets. 250 to 350 sinking shooting head lines on 7, 8, and 9 weight rods worked perfectly and these albies were on average a couple of pounds heavier than what we had been catching elsewhere.

Tuesday was strange. The fish turned on for 30 minutes and ate hard. The wind was building and the current picking up. It was rough and getting rougher, conditions that these fish usually relish…and… it just changed. Either the fish departed or they sounded and the show was mostly over just when we thought it would go on all morning. It surely wasn’t due to pressure as there weren’t many boats out in that building blow.

And then there was Wednesday. At 9:00 it was like someone threw a switch. Despite slack current, the fish that challenged us to catch 2 in two hours turned on and all of the boats were battling albies. As the fish pushed inshore and had the bait corralled, they became wicked, wicked, fussy. Nobody was catching. There was a lot of furious knot tying going on but the fish kept feeding, just ignoring all of the fake meals tossed their way. At times that type of classic albie behavior can be maddening, but it is also somehow incredibly appealing. It's like a difficult puzzle that has you up too late, as you refuse to give in and give up. We never really figured them out before we had to run for the dock. We had a couple of swings and misses, but no riddles solved.Of course we did run into a pack of chomping albies 5 minutes from the dock that ate with glee on the first cast. Typical albie fishing. We left huge numbers of fish that were giving us the finger and ran into a small group that ate everything tossed their way.

Being on the water every day does help in the search for these fish and in developing strategies for finding "happy fish" when the going gets tough. We use what we've found and learned and heard in previous outings but at least this week you couldn't do exactly what you did the day before and come home happy. If you heard you missed the good bite yesterday at Cotuit, you will often be better served by checking logical spots in the general vicinity verses expecting a repeat of the day before, especially in this all-over-the-place weather pattern.

If this craziness sounds appealing to you and you have never experienced the rush of adrenaline that comes when casting to busting albies and feeling the energy of their fight, give me a call. I have a few open dates next week and the week after for charters here on Cape Cod. Before we know it, these fish will be gone until next year and we will be left with dreams of darting terns and perfect fly casts. 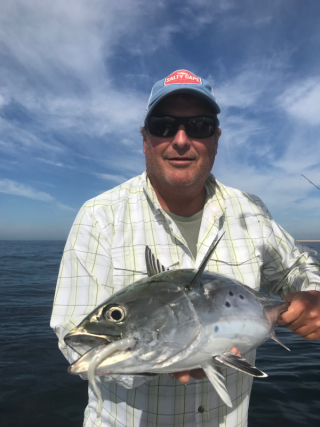