What Do Albie Fishing And High School Share In Common?

The quote of the week came from Fritz Folts on Sunday. After two days of finding fish after fish after fish we were trying to run his Southport back to Boston but kept running into albies off Falmouth and then again around the Mashnee Flats and west end of the canal. Fritz was in the zone. I mean he was dialed right in. He was seeing the fish as soon as they surfaced and putting his casts exactly where they needed to be, time after time. After Fritz landed yet another albie, he said “Next year I need to block off four full days in a row to fish. Chasing albies is a lot like high school - by the time you really figure it out it’s time for graduation”. 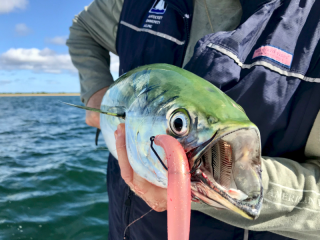 Yet another Fritz Folts-caught fish