I Want June To Last 90 Days 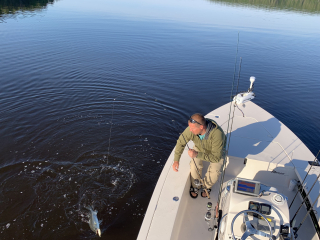 It sure felt like late June on the Kennebec River this week. On Tuesday, we were on fish pretty much the entire trip, from 6:00 am until 4:00 pm, and found the stripers feeding and holding in almost every way you might expect to encounter them up inside the river. Only thing missing for us were bigger bass.

We started on a mudflat that had good numbers of fish very happy to eat on top, although they weren't doing a fabulous job of showing themselves. We kept talking about making a move and another striper would demolish the spook. Our first move ended up being about 200 yards off the flat to spots down the shoreline where the fish kept popping and calling us.

By the time we made our second move, the tide was ebbing nicely and fish in shallow water were gleefully sipping very small bait. I couldn't tell if they were little silversides or something else, but the slender craft fur hollowfleye outfished the the slightly longer, decidedly wider, spun deer hair slider by a wide margin. These fish weren't pushing water, unfortunately, but were rising in the current with frequency.

From there we headed to a cove loaded with bass hugging the bottom and hanging on the ledges when the current moved well past the structure. Then onto a flat that would be uncovered in two hours where we found fish but were working blindly due to the building breeze. A hundred diving herring gulls (aptly named given what they were eating) led us farther downriver to strong current tumbling and roiling over big ledges. Bigger offerings didn't bring us bigger fish, but there were plenty of bass and not all of them were right under the birds.

As the tide started to rise, the wind very cooperatively shut right off, and we poled up an immense expanse of a flat working fish that would reveal themselves with swirls and subtle pushes of water. Oh, what fun, but as is the case in saltwater everywhere, an hour later the conditions had changed enough to change the fish' behavior.

We started back to the ramp but had to check a hump in the middle of the river that had three birds circling high over it as the incoming current built in speed. Yup. Loaded with stripers. After some fun fishing in a completely different way, we called it. Well, we did. But we also made one last stop for a couple last casts and caught two fish in three feet of water that ended the day as we started, inhaling the spook with complete conviction. Whoa. What a trip.

The Kennebec watershed offers an incredibly diverse range of options when targeting striped bass. The rambling recap above of one charter itinerary doesn't even cover it all, as we never fished oceanside ledges or any of the beaches, nor did we get up into the salt marshes.

It feels good to get dialed back into what is happening here on the river after a whirlwind of trips out of Martha's Vineyard, Boston Harbor, a day in the driftboat targeting smallmouth bass, and a quick dash to Barneget, NJ. My only lament is that June is almost over.