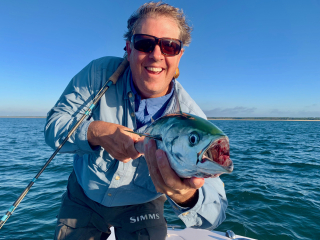 In this season of sipping albies, one of the most effective tools we've employed has been a floating fly line. Read articles about fly fishing for false albacore and you'll find recommendations to use an integrated sinking shooting head, mostly for the advantage of minimizing false casts to these fast moving fish. Check out an experienced albie angler's quiver and you're likely to find at least one rod rigged with an intermediate line (slow sinking), probably featuring a clear tip or fully clear line. There are lot's of instances when one of these two line choices makes the most sense, however, when the fish are cruising and "ram feeding" on micro bait, the ability to quickly pick up your cast and reposition your fly can be a game changer. 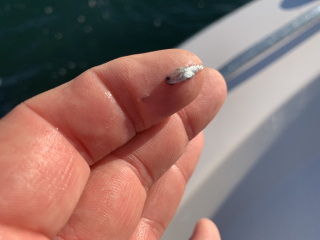 This September and October around the Cape and Islands, the majority of albies we found were in small groups and focused on tiny bait. They've often been out in deep water, working rips and other, more subtle structure, or even just featureless bottom with some kind of moving water. The fish cruise just below the surface, breaking the surface as they travel, often with open mouths sucking in the micro bait. If you've ever seen bluefin tuna ram feeding on krill, you know just what this looks like. The albies will circle briefly, what I refer to as "going around the rotary once or twice", before selecting their exit direction, and continuing on down the road. Being albies, they don't stay on the same course for very long even if their general direction of travel is constant for a period of time. This is effectively very different from a big pod of false albacore crashing bait and herding it down a beach or rocky shoreline or groups churning in a constant direction in open water. In those instances you have the opportunity to position the boat well ahead of the fish (usually up-current or up-wind or both) and wait for them to come to you. If you don't get a good shot or don't have a fish eat, you're likely to have an other opportunity momentarily. Plus you know that the majority of the albies in the school aren't showing on the surface and your fly is often inhaled by a fish not seen. Not so in this game. Everything is moving: fish, boat, water, position relative to wind and current. We still work for a position ahead of the fish and ideally with the wind in casting-favor, but the caster is likely to get one or two (maybe three) shots at the small school before you have to reposition the boat. Everyone strives to make their first cast count, but even the perfect presentation becomes futile when the small pack of funny fish alters course while your line is shooting out to it's intended destination. In this instance, being able to quickly pick up and re-present your fly can double (or triple) you chances to get your offering into a pretty limited strike zone. 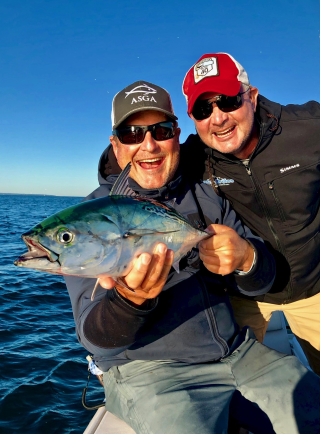 The advantage of being able to quickly pick up a lengthy line has often been offset or outweighed by the time delay from cast initiation to fly presentation when using a floating line. So often in the fall, the wind is blowing, and the smaller diameter sinking lines offers less wind resistance. The trade-offs have fallen in favor of the shooting head line that sinks either quickly or slowly, but no more. The game changer is a "tropical" floating line that functions well in a temperate environment. I started fishing Scientific Angler's Amplitude Grand Slam line on the flats for striped bass this June and instantly fell in love with it. I had been fishing an all around floating line that was new as of late May and the difference in the way the Grand Slam line shoots was stunning. It's designed to excel at both long casts and quick, shorter shots on tropical flats and has a fairly stiff core, but, is also rated to perform well in warm water. SciAngler uses the following designations for fly lines: Hot, Warm, Cold. I suspected from past experimentation that a line rated for Hot climates would be a hot mess in Maine even in mid-summer. But what about this Warm rating? I was curious to see if I could find a line that "feels like" my favorite bonefish line in a setting where long casts do matter. A stiffer core that is less likely to tangle in the wind would really be a plus.

Whoa. This line was stunning from the first time I cast it. It boomed out there with minimal false casts, noticeably fewer than any other floating line I had in my bag. It made the "oh shit, fish!" cast, the one that we should practice more, where a shallow water target seems to appear next to the boat out of nowhere. It could handle a clunky crab pattern but was subtle enough to use in 18 inches of water on a clear flat on a windless day.

An added benefit that I hadn't anticipated was how comfortable some of my anglers were with a floating line but not a sinking one. These were good casters with lots of fishing experience, but just not familiar with how a 350 grain shooting head behaves. In the heat of the albie moment, they could react and feel confident with their casting ability, and that led to more hook ups. 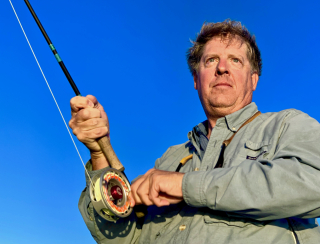