Calling All Striped Bass Anglers And Guides - Our Fishery Needs You 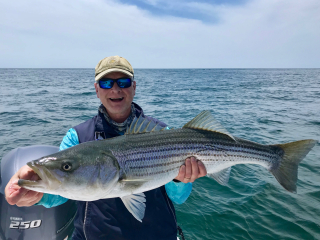 Calling all striped bass anglers and guides: our fishery needs you. Massachusetts Division of Marine Fisheries is considering a proposal to open their commercial striped bass season early this year. In recent summers it has started June 23. They are looking at starting it as early as June 1. The rational behind the proposal is that commercial anglers have not harvested to their quota cap the last two years. In 2018 they only landed 89% of their quota cap. Last year the harvest fell to a startling 67% of the total pounds allowed despite strong markets in both years.

Striped bass are in trouble. The failure of the commercial fleet to catch their full quota is telling. Yes, MA DMF deserves credit for reducing the commercial quota by 18% this year but with so many unknowns about the effectiveness of new regulations in all of the East Coast waters these fish inhabit, now is not the time to be adding additional days to an effort that removes fish 35 inches and greater from the population.

If you fish for striped bass, you are a stakeholder. Even if you never fish in Massachusetts waters, what happens there to these migratory fish matters to you. If you live in Massachusetts, or travel there to fish, this is especially relevant. If you live or fish in Maine or New Hampshire waters only, where do you think you would find the majority of fish over 35 inches that are bound for us are between June 1 and June 23?

You can influence the decision by MA DMF, but you need to speak up now. MA DMF is holding public hearings and accepting public comment via mail and email through 5:00 pm Monday, March 16. Link for details is below. Your comment can be short and succinct. Tell them that you are concerned about the state of the striped bass fishery and want more conservative management measures, not less. Add whatever details stand out to you. Make it your comment with a line about why this fishery means so much to you. Public input made a difference last year when MA DMF asked us for our opinion on adding an additional day per week to the commercial open season. We need your comments again.

Below the link to the details on the proposal (includes hearing locations and dates and email link to submit comments) you'll find a copy of my letter to the head of the agency, Acting Director Daniel McKiernan. Let me know if you have questions or if I can help you with your comment.

I’m writing to express my opposition to the proposal to open the Massachusetts commercial striped bass harvest earlier than June 23 and to share my overdue appreciation for your leadership at the February ASMFC meeting of the Atlantic Striped Bass Board.

I am gravely concerned about the current state of the striped bass fishery and even more afraid of where we will be three years from now. I’m working to become more informed, more involved, and to bring others into this process. I travelled to the February ASMFC meeting at my own expense and I appreciate and applaud your efforts at the striped bass board meeting to promote consistent regulations coastwide, to check some of the more irresponsible CE proposals from New Jersey and Maryland, and to lead the push against the New York proposal to allow their charter/party boat fleet to harvest fish 31” and greater. While I originally advocated for the option that would establish a 35” minimum size, I have supported the need for consistency in regulations coastwide. Thank you for speaking up for responsible management, both at the board meeting and in your letter to your counterpart in Rhode Island.

Now a resident of Maine, I fish frequently in Massachusetts waters, both recreationally and as a for-hire charterboat captain. Growing up on the water in Scituate, I first earned my Coast Guard license in 1986 and ran private and charter boats out of Boston for a number of summers. I started Gillies & Fallon Guide Service, LLC in 2004 in Phippsburg, ME but extend my season and market by traveling south to fish Boston Harbor to Martha’s Vineyard, with the longest stint in the fall when I am on the Cape for September and most of October.

I am not opposed to the commercial harvest of striped bass. I live in a community that is centered around people who make their living on the water. I’m on the town committee that has just received permission to open a limited commercial river herring harvest in one of our ponds. I paid off my college tuition bills catching lobsters and tuna. I have kept my distance from advocacy organizations that have seemed more interested in resource allocation than overall well-being of the fishery. And while I understand the logic behind the argument that commercial striped bass anglers have an approved quota and thus should be allowed more opportunity to harvest that quota, I don’t believe it would be a prudent management decision.

You and the Department of Marine Fisheries deserve credit for honoring the guidance of the ASMFC striped bass board and applying equal 18% reductions to the recreational and commercial harvest targets in the state, however, there are so many unknowns about the results of all changes brought about by Addendum VI that a more conservative approach is warranted. The failure of the Massachusetts commercial fleet to reach the harvest quota cap the last two years adds further weight to the argument for an abundance of caution in management decisions. We have yet to hear back from the Technical Committee regarding their calculation of the projected cumulative mortality reduction as a result of Conservation Equivalency approaches from a number of states. Between New Jersey’s bonus tag program and Rhode Island’s potential 30” to 40” CE, we could be harvesting over a much wider slot than originally intended and the TC has been clear that predicting the effect of any slot limit on striped bass is challenging. Slot limits are an untested tool when it comes to management of this species. With no mechanism in place to hold states accountable for their results under CE proposals, we’re at least two and likely three years away from any ASMFC changes to react to changes in the striped bass population. Commercial anglers might argue that what happens on the recreational side shouldn’t in any way impact their portion of the fishery but I would suggest that we need to consider each and every management decision with respect to the overall health of the fishery and we’d be well served to remember that we’ve reached this point in part because Addendum V has failed.

Massachusetts could support and strengthen the commercial striped bass harvesters who make some significant portion of their income from commercial fishing interests with other regulatory changes. There is support in portions of the recreational and for-hire community for changes to the commercial harvest rules that would serve to limit participation and potentially raise prices, directing use to those fishermen who are most deserving of access to this limited and valuable resource.

Retaining the June 23rd opening of the commercial season sends a signal to all stakeholders that you and the Massachusetts DMF are committed to taking steps in the best interest of rebuilding this fishery. The measurable decrease in commercial harvest landings in 2019 and 2018 are a message that should not ignored. I heard resounding approval of your organization’s 2019 decision to keep the open commercial harvest days at two when it was clear that we wouldn’t reach the quota cap. My understanding is that the decision was based in part upon the volume of public comments opposed to adding the third day. Your organization listened to public input last year and I hope will do the same this year.

I couldn't describe the dire Striped Bass situation more succinctly than Captain Fallon. As a recreational Striped bass angler for the past 40 plus years I am concerned for the future of the fishery. I flyfish primarily and release all fish caught, use barbless hooks. I have witnessed a steady decline of their population in my area and am counting on you to do the right thing for the fishery.
Concerned,
John P. Andia