A Dynamic Environment - Striper Fishing Changes in The Kennebec River 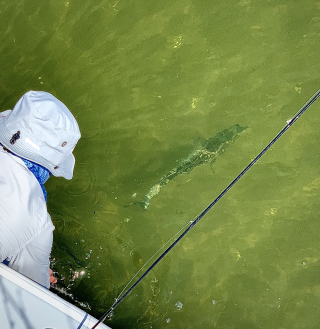 The end of June and beginning of July marks a transition in fishing conditions in and around the Kennebec River. The frequent and wide-spread surface feeds of the early season taper off. You can still find striped bass busting on top, complete with diving birds, fleeing bait, and all that entertaining mayhem, but it's more limited or concentrated in location and often duration. There are stripers eating every available bait in all types of habitat right now, from big herring in the current to tiny shrimp on the sand flats. Some anglers shift their focus to bumping bottom structure with bait such at eels, live mackerel, or bloodworms or working same areas with jigs rigged with soft plastics and this approach accounts for a lot of the fish taken that fall into the legal slot limit. Others move out of the Kennebec and work the beaches and ledges from the Sheepscot to Small Point, tossing livies into the surf or working big plugs at night and some of the biggest fish taken every early July will come from these waters. For me, it's prime time for bigger fish on the flats. We usually have improved water clarity, more windless mornings when the fish wake in the shallows, but still-hungry stripers willing to chase down a Hollow Fleye in two feet of water or slurp a shrimp fly like one more peanut at a cocktail party. Usually.

We were setting up for what was looking like a really good early July. June featured lots and lots of fish, feeding with abandon, and hoards of them to be found up in the shallows. Somedays those stripers forced you to change flies 12 times an hour and you never felt like you dialed them in but caught enough to feel good about yourself. Other days the "hero fly" sent you home on top of the world. There was a noticeable drop off in numbers of bass over 26 inches compared to a few years ago, but enough visible in the water or on social media that you knew you had a chance at a bigger fish every trip. One charter last week didn't produce a fish over 25 inches but we sure saw some and had every confidence that with the right opportunity, our crab fly would get hammered, based upon the reaction that it was getting from the fish that presented us with good shots. On Thursday, under bright sun, we had shot after shot after shot at fish up on sand and mud flats and working the edges of the same flats at low water and had some fun eats, but lot's of almosts. The numbers of fish we were seeing had me really excited about the charters I had lined up for the coming days. 7 out of the last 10 years, the biggest fish out of shallow water has come in the first 10 days of July, and while that might be shifted a little later for 2020, things were on track for a hell of a holiday week.

And then it changed. Between June 28 and July 1 we had a lot of rain, especially upriver in the Kennebec and Androscoggin watershed. Stations I checked reported between 5 and 7 inches of rainfall during that period. The river rose and eventually all of the muddy water arrived here in Bath and Phippsburg and Georgetown. We had an excellent bite the morning of July 4 in some cleaner water on the coming tide where stripers were hammering herring in strong current but then when we moved to work the flats with the rising tide, we were hampered by coffee-colored water everywhere. Not only did we have limited spots where we could have a chance at sighting fish, we weren't even bumping or spooking them as we prospected through the shallows. The Humminbird Mega Side Imaging sonar was confirming what our eyes were not seeing. I heard from a buddy of mine that his live mackerel were dying only a few miles upriver from the mouth of the Kennebec. On the incoming tide! That's a lot of freshwater. 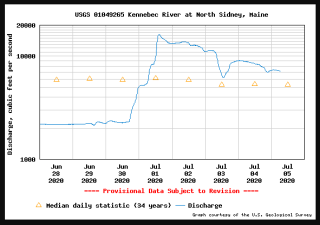 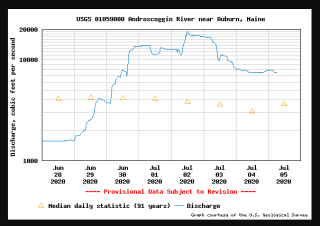 Striped bass are incredibly tolerant of turbid water and suspended sediment. Their gill structure allows them to patrol the surf zone with comfort in that area that deposits sand into the liner of your bathing suit. They can also rapidly adjust to changes in salinity by regulating osmotic transfer across cell walls (bring you back to senior year biology?) at a pace that is impressive. There are still plenty of striped bass in and around the River, but if you notice that things are "off" or different than the last time you were out a few days ago, you have my guess as to why.

The good news is that we've seen these changes in conditions plenty of times in past seasons (most often in June) and with some drier days, will be back at it on the flats with happy fish and good visibility. If you're planning to fish, go fish. There are stripers here to be caught and in some spots at certain tides it will be Game On! But have a change in game plan in your back pocket. If what usually produces for you isn't, mix it up. Try something or somewhere different. Every trip out is a chance to learn and the opportunities to do so are truly unlimited.

Thanks Peter for the great piece. Very helpful to get a perspective from someone who is on the river daily and is observant and knowledgeable.

I have had some fine fishing trips, but have noticed the change -- your writing and analysis helps me understand it better. Thank you