Maine Striper Fishing: Now Happening at a Coastal Location Near You 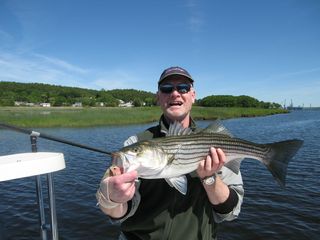 Stripers are back in the Kennebec River and all along the Maine coast as far east as Thomaston. Just in time for a stellar Memorial Day weekend, the striped bass have returned from points south for another fishing season.

The stripers we found last night and this morning in the Kennebec were chasing herring to the surface in very sporadic bursts, one fish at a time. We never saw them get their act organized into anything approaching a flurry, let alone a blitz, but it was so satisfying to see the fish here after another Maine winter.

We even found striped bass up on the mud flats at 10:00 this morning. How nice to pole for them here in the month of May. Fritz did a masterful job coaxing a healthy looking 25 inch bass to eat after four swirls of inspection. Water temps were as high as 68 degrees. 68 degrees. That's amazing. The river is filling in nicely with herring. You'll see them flipping on the surface from Popham up past Bath. We didn't find a lot of fish, but this time of the season, that can change dramatically day by day. News from other guides just to the south is encouraging. We may fish Casco Bay or the New Meadows for tomorrow's charter, just to mix it up a bit. Off to the Sea Dogs game tonight but Fritz and I will be back at it tomorrow morning at a coastal location near you.

You Can't Make Chicken Salad Out Of Chicken Sh*t...

...or why we need a National Saltwater Angler Registry.

So now you know that you need to register with NOAA (or have a saltwater licenses from an approved state) in order to fish for striped bass in Maine on New Hampshire or Massachusetts. Why? The frequent lament of some anglers is that this new requirement is just another money grab by the federal government or an example of more meddling by Washington in matters best left to individual states. Here's the story.

NOAA is the federal organization charged with managing marine fisheries. They submitted their recreational fisheries data collection program, known as MRFSS, to the National Research Council for review. The NRC is a private, non-profit, independent agency chartered by Congress. The scientists who contribute to NRC studies volunteer their time. The organization has a well deserved, excellent reputation within the scientific community. In 2006 the NRC came back to NOAA with a report that said they weren't doing good science. It wasn't an indictment of their efforts but rather of their systems. Their sampling methods needed significant improvement.

Under the MRFFS program, one of NOAA's  primary data collection methods was the Coastal Household Telephone Survey. NOAA (or state) reps made random calls to households in coastal counties to collect data on recreational fishing by members of that household. Did I ever get one of these calls? No. Could I have received one of these calls. No. Why? Because I don't have a land-line. I use a mobile phone as my only phone and the survey had no way to track cell phone users who resided in coastal counties only. One of the other flaws in this program is that saltwater anglers who didn't live in a county bordering the ocean were never called. The striper fanatic from Farmington, Maine or Worcester, Massachusetts was never going to get a call. Neither was the person from Ohio who spent two weeks on Martha's Vineyard fishing the Derby. What would significantly improve NOAA's ability to efficiently collect data from saltwater anglers? The NRC said "their names and contact info".

As a migratory bird hunter, state and federal agencies have my name, address and phone number. They send me requests for information and wing samples. They ask me questions about my previous season's efforts and harvest when I renew my license. My wife is not a migratory bird hunter. They don't waste their efforts asking her about the number of woodcock that she harvested last year but they do capture that data from every person in the country who legally hunts woodcock. By sharing information between federal and state agencies, the people managing our migratory gamebird populations have a national database of migratory gamebird hunters. The NRC said that NOAA needed the same thing.

The Coastal Household Telephone Survey was not the only flawed program that the NRC flagged and the need for a national database of saltwater anglers was not the only change that they recommended. More on those topics in another post. When Congress reauthorized the Magnuson-Stevens Fishery Conservation and Management Act in 2007, it told NOAA to implement many of the changes recommended by the NRC, including the creation of a national angler database. NOAA's stated preference is to have the coastal states enact registry or licensing requirements that meet their data collection needs and then share the contact info. Until all of the states do so, NOAA has created the Marine Recreational Information Program (MRIP) and the National Saltwater Angler Registry. Their goal is to be more efficient in collecting more complete info such as who fishes, what's being caught, how many fish are being caught and when and where people are fishing.

Sound management of any natural resource depends upon sound science. Without good data, you can't have good science, thus the reference to chicken salad. Sound management is also based upon social and economic values and decisions. The data that NOAA looks to collect from those of us who fish in saltwater is also used to determine the social and financial value or worth of our coastal fisheries. I know that I want to be counted. How about you?

I just returned from a meeting of the Maine Assocoation of Charterboat Captains with representatives of NOAA, the Maine Department of Marine Resources and the Chair of the Marine Resources Committee from the Maine House. Like most fisheries management forums that I've attended, there was some contentious and passionate debate, focused on the new law in Maine enacting a state saltwater fishing license for 2011. One provision requires commercial boat operators to purchase an additional license that exempts their clients from buying a saltwater license when fishing on the charter or head boat. A minority of the captains in attendance were incensed that the state was leveling another fee on their business, that the provision was added to the bill at the 11th hour and that they had no option when it came to carrying this license. Most of us in the room expected that Maine would copy most of the other states that already require saltwater fishing licenses and charge charter operators a fee that would cover their clients. I'd prefer to write fewer checks to the State, but I'm glad that I can cover licensing requirements for my clients.

I'll add more details about the Maine saltwater license bill in the coming days, but the law doesn't take effect until Jan. 1, 2011. So what about this year? What do you need for a license to fish for striped bass in Maine in 2010? There has been confusion and debate in various articles. Here's what you need to know.

If you are going to fish for striped bass in Maine in 2010 you must register with NOAA through the National Saltwater Angler Registry. The process is simple and efficient and there is no fee. That's right, it is free. The reason for the new registry is to build a "phone book" of saltwater anglers to significantly improve the data that NOAA collects on recreational fishing.

There are exceptions to the registration requirement. If you are fishing on a charter, head or guide boat you don't need to register. You do not need a license if you come out with us, as we are already registered in the NOAA database and provide them with the information that they are seeking.

If you are under the age of 16 you don't need to register. If you hold a Highly Migratory Species Angling Permit you do not need to register (however, anyone else in in your HMS permitted boat does need to register). If you are a non-resident angler already registered with NOAA either through the National Saltwater Angler Registry or through a state saltwater license (recreational or commercial) that NOAA recognizes, you are all set.

These registry requirements and exceptions for fishing for striped bass in New Hampshire and Massachusetts are the same as Maine for 2010.

I'll write more about the origins of the federal registry, the coming state licenses and why they are good ideas (not always perfectly executed) this week. Let me know if you have questions.

Might be time to toss your rod tube, chest pack, stripping basket and waders into the back of your car or truck. I spoke with two friends who've been catching stripers in Maine waters this week. The reports from guides north and south of Cape Cod continue to point to a promising season.

This early and warm spring has the fresh water fishing in Maine peaking right now in many areas. If you want to chase brook trout and landlock salmon (and some browns and rainbows) you should get in touch with Greg Bostater at Maine River Guides. I teach fly fishing with Greg at the LL Bean Outdoor Discovery School. No matter your level of experience, you'll learn much from Greg and have a fabulous time doing so. He's wicked fishy too.

See you on  the water soon.

An Important Question You Should Be Asking Yourself... 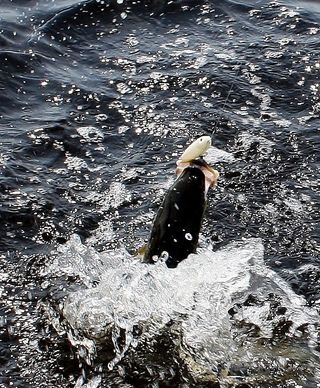 Why Did I Just Catch That Fish?

If it hasn't happened for you already, it should, soon. You'll feel that tug or tap or whomp and another striper fishing season will be successfully underway. You'll grin, maybe hoot, even possibly do a jig on that ledge or up on the bow. It'll be a mix of excitement and relief that will wash over you as you realize that yes, you can still do it and for a few moments all will be right with the world.

Revel in the joy. Catch another fish. Send a photo to your buddy at work and then get serious. Remember, you're a predator, even if you painstakingly and religiously release every fish you catch in a season. Start asking yourself why you succeeded.

Note what you did to get the hit. Where did you cast relative to the current? What was your rate of retrieve? What depth were you fishing?

Note what prompted you to make those decision. Did you see bait skittering across the surface? Was there a visible eddy line, or depression on a sand flat or an edge to a patch of eel grass that caught your eye? Was a single gull sitting on the marsh bank just beyond where you cast?

Now see if you can replicate the result.

If you enjoy analyzing events, and you seek to comprehend cause and effect, think about spending some time on the water with us this season. We don't have all the answers but we're always asking lots of questions.