Fly Fishing for Stripers: "What are you using?" 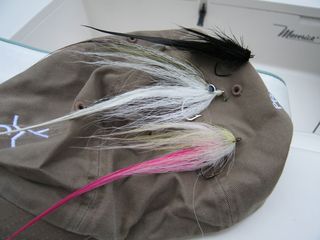 Fly fishermen tend to get very focused on what fly to use. I'm guilty. Come on admit it. You do too. Stripers on the flats, brookies in a beaver pond, browns on a big river, we often ask and hear "what fly are you using?" When we ask, "what worked", we're really asking about the fly that caught fish. The reality is that variables such as presentation, depth, movement, time (of day, of season, tide in saltwater) are usually much more important factors in success than fly selection. But...it's still fun to talk about flies.

We started the day poling a mudflat off a salt marsh with a small creek opening. The tide was dropping but the current in the river really hadn't yet picked up steam. Zero wind and just the right amount of fog made for perfect conditions. The stripers were pushing water and swirling on bait and we could see it all. First fish came soon after we started. A small pod of a couple bass were cruising down the edge of the marsh over some flooded grass. They kindly offered us an ideal presentation as they were tracking straight towards us, set to pass down the left side of the boat. Roger made the cast and two strong strips and then bam! A big swirl then splash and smiles all around. 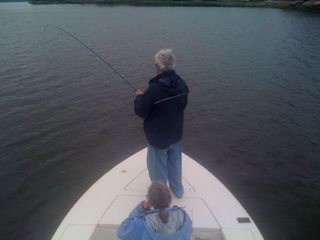 ed around up on the mudflat for a while. Landed another nice striper, had some other chances and lined a fish or two. Roger showed up this morning with his rod rigged with a small purple over white with pink glimmer Clouser that his long time fishing companion Andy had tied for use on the Morse River. The section of the river where we started our trip was loaded with herring and we could see and hear them flipping on the surface less than 50 yards from where we were fishing but the bass that were feeding on the flat weren't chasing big bait. The "rise form" was far too subtle, just that telltale swirl of a striper slurping something small. Andy's purple haze Clouser wasn't a fancy shrimp imitation but it worked just fine. Roger and I talked about emailing a couple of photos to Andy who was stuck in his office back in Connecticut, but decided that we wanted all of the good fishing karma that we could get.

Once the current in the river picked up the action on the flats slowed down. We ran around for a while, checking some other edges and rips. Only saw one brief blow up in about a foot of water but by the time we could pole up on the fish they were gone. We made the switch to the bubblegum hackled hollow flye and a 350 grain RIO line and started working along ledges that faced the ebbing current. Wasn't long before we tracked down individual stripers coming up to chase a herring. We picked up a couple more fish working the eddy lines and switched to the herring grocery fly just to see if we could discern a preference. Worked..but no better than the hollow flye. 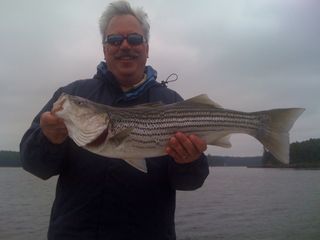 down river to pick up Roger's wife for the last two hours of the charter. Nothing remarkable to report from our prospecting at the mouth of the Kennebec as the tide was filling back onto the flats. We did see Chester Rowe returning from a very successful mackerel outing with two of his longtime clients. Chester kept one eye on the fishfinder screen while cranking in mac after mac but never saw a big arch under the schools of striper bait.

Our last stop was on another mudflat adjacent to a marsh and creek. Roger was surprised when I clipped off the Clouser and replaced it with the black slinky snake fly. He remarked that he often used a black snake fly when fishing at night but never would have considered using it at noon. I'm a big fan of black, olive and purple in stained to murky water over a mud bottom at anytime of day. The wind was up and the sky still overcast, so we had no visibility down into the water but it wasn't long before we found fish giving themselves away. It wasn't quite sightcasting, but if we could get the fly in the area where a fish had just swirled it resulted in an explosion and then that sweet sound of zzzzzzzzzzzzzzzzzzzz. These were also pudgy stripers, dark in color and absent sea lice, just like all of the other fish we had landed.

Roger and I kept talking about how much fun it is to cast to fish that you can see and to catch striped bass in skinny water. We really enjoyed ourselves. Roger was thrilled to kick off his Maine striper season with some success. Hope you get out wherever you are. It's June and all over New England, now is the time to fish.