What a fun day. Started up on one of my all time favorite flats at first light. The stripers were amazingly fussy. They were grouped up into schools that were too large. Drop the fly just a little too close to the pack and vooooom, the entire group erupts and scoots. I much prefer chasing pods of four, six , ten fish, where there is enough competition to encourage eats but not this skittish behavior. I was surprised at how almost all of the bass on this flat were in schools of twenty, thirty, fifty fish. It was very demanding, very cool and very satisfying.

As the tide dropped out of this bay there was one pack of striped bass that packed themselves so tightly together and roamed making tight circles as they went. The sun was high enough that they looked like a large patch of weed on the bottom from a distance, just a black glob. They were exposing fins on the surface, swirling, cavorting but not eating. 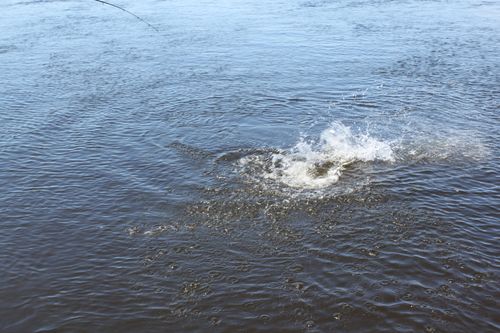 I picked up Sarah at 10:30 and ran back to a spot were I had fished at the end of the dropping tide. There were waking fish for a while as late at 9:00 which was a treat. On this flat the water was still murkey enough that unless the fish were pushing water, there was little chance to see them until right on top of them. I did spook one huge fish. This striper was over 40 inches. It had broad shoulders and a huge light colored tail. Under bright sun a few of the fish started to pop bait right on the edge of the still ebbing current. It was a nice way to finish the morning. 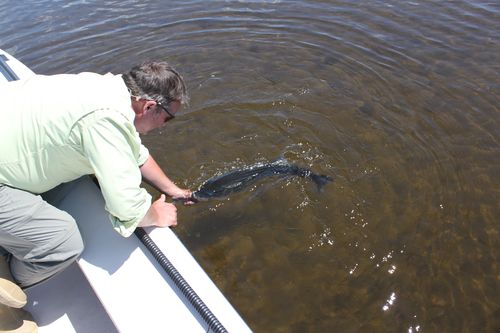 Well, the real finish to the morning was running out past Reid State Park to Five Islands for lunch.

There was more from today that I'll share tomorrow but its late and the alarm is set for early.

I've just started the flats game on fly this past weekend in southern Maine. It has been frustrating to say the least but we are learning. A poling platform would be nice but the 15' Whaler with a trolling motor is proving to be adequate. Need to make some line changes in order to stop spooking fish but it has been the most fun fishing I have had in a long time. Just the shear numbers of fish you see while working a flat is fun. Hope your fishery holds strong!