Despite continued dirty water, the Kennebec River is still fishing well for striped bass from Bath through Phippsburg to Popham and around to the New Meadows. The combination of a lot of water coming from upcountry rains and some high full moon tides, has the river a mess. Once the stripers are done waking, sighting on the flats is non-existant much past the beaches on the way upriver and running in the dark is not a good idea given the lumber floating around but...the stripers are here and happy to eat.

We fished both fly and spin gear this morning. The Lonley Angler Zipster was far and away the best producer, which makes sense (surface splash, rattle) given the water conditions but we also caught bass on Hollow Flyes, Mushies, small Clousers and surface sliders. The average size of the fish was pretty small this morning, but it really varies day by day, angler by angler, cast by cast.

The guides I know who are drifting live bait back into the surf along the beaches are doing well. We've got some cloudy days on the way, good news, but also some more rain, bad news. Casco Bay should be cleaner and I expect to get over there early next week after a quick trip to fish Boston Harbor again this weekend. If you have the chance to get out and fish, don't let it pass you by.

Everything I'm hearing about striper fishing in Maine is supporting what we're finding in the Kennebec River and Eastern Casco Bay. The striped bass are here and in good numbers. The bait is here and nervous, for good reason.

Schools of mixed sizes from under 14 inches to 32 inches were popping to the surface this morning, sometimes for a short burst and other times for a sustained feed. Most of the stripers we found were in 2 to 6 feet of water which was nice to see. The Kennebec is still very muddy. The bass could find the fly, but they would "miss" often and I think it was due to water clarity issues. A little surface splash went a long way in helping the stripers locate the faux meal we were serving.

Tides aren't strong right now, but that isn't a deal breaker by any means. Pay attention to water movement, look for subtle signs on the surface and don't forget to use your ears. The best feed of the day came to our attention from some distance away when we tuned in to the slaps all the way across the river. 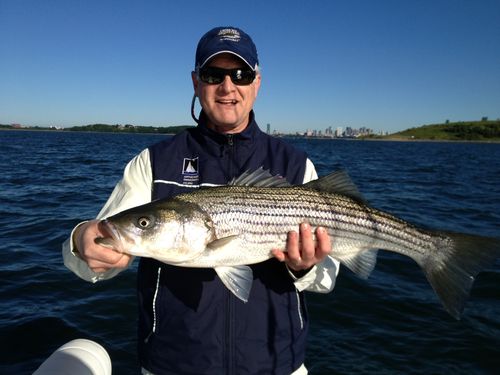 It's been a great couple of weeks fishing early season stripers down here around Boston Harbor but now it's time to head home to Maine to fish the Kennebec River and Casco Bay. I'll post a recap of adventures in urban angling soon but I need to hit the road. I'm excited to get back up on the poling platform of the Wasabi and work across mud flats, sandy bays and mussle bars seaching, searching, searching for those telltail signs of striper activity. I'm not looking forward to seeing the color of the Kennebec when I get back to Phippsburg. We need a halt to all of this rain. Reports from fellow guides in Maine are encouraging.